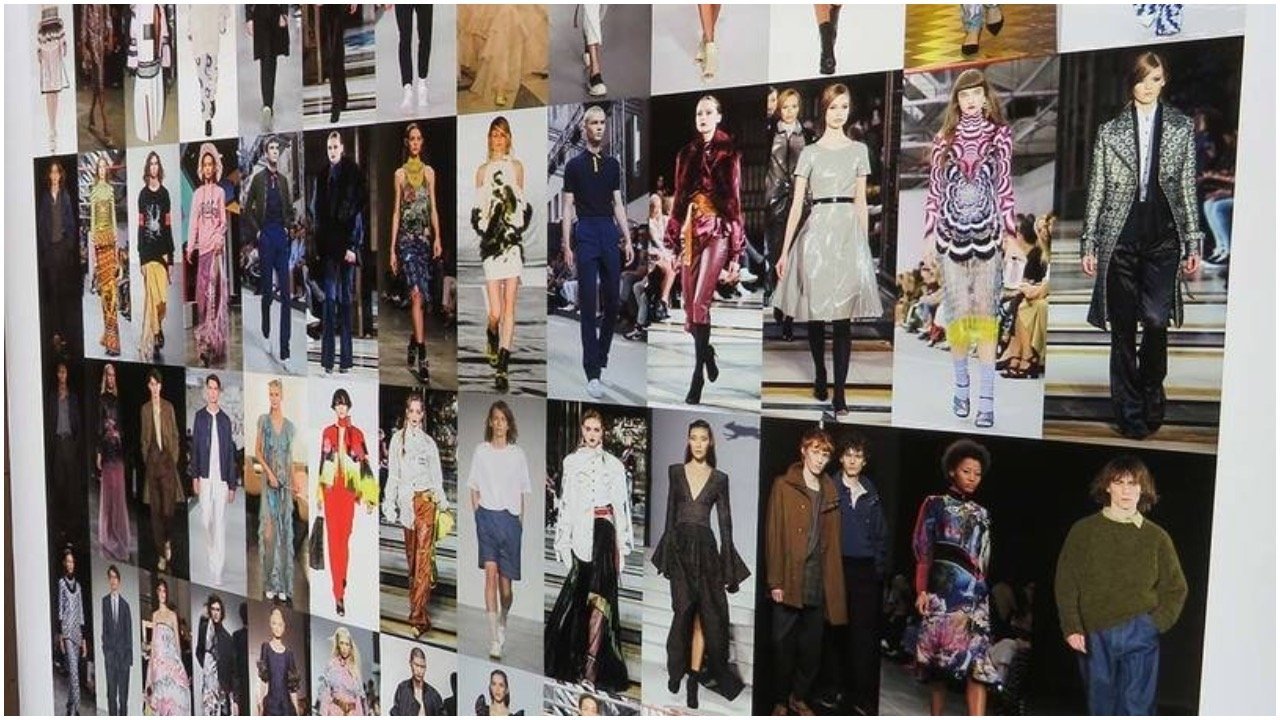 Did I mention I was lucky enough to take part in London Fashion Week in September? (Cue excited kid at Christmas face!). It was a real ‘pinch me’ moment as it’s something I’d wanted to be part of for a very long time. I wasn’t in the audience though, I was backstage dressing models for their runway debuts. I still can’t quite believe I am saying that – it was definitely a dream come true moment.

I was privileged to dress for two London Fashion Week SS20 catwalk shows for designers Sharon Wauchob and Rocky Star at Fashion Scout. It was an incredible few days which included dressing nineties supermodel Jacquetta Wheeler, who I can confirm was an absolute delight, and mixing backstage with Emmy Award-winning American Broadway theatre performer, singer, and actor, Billy Porter. 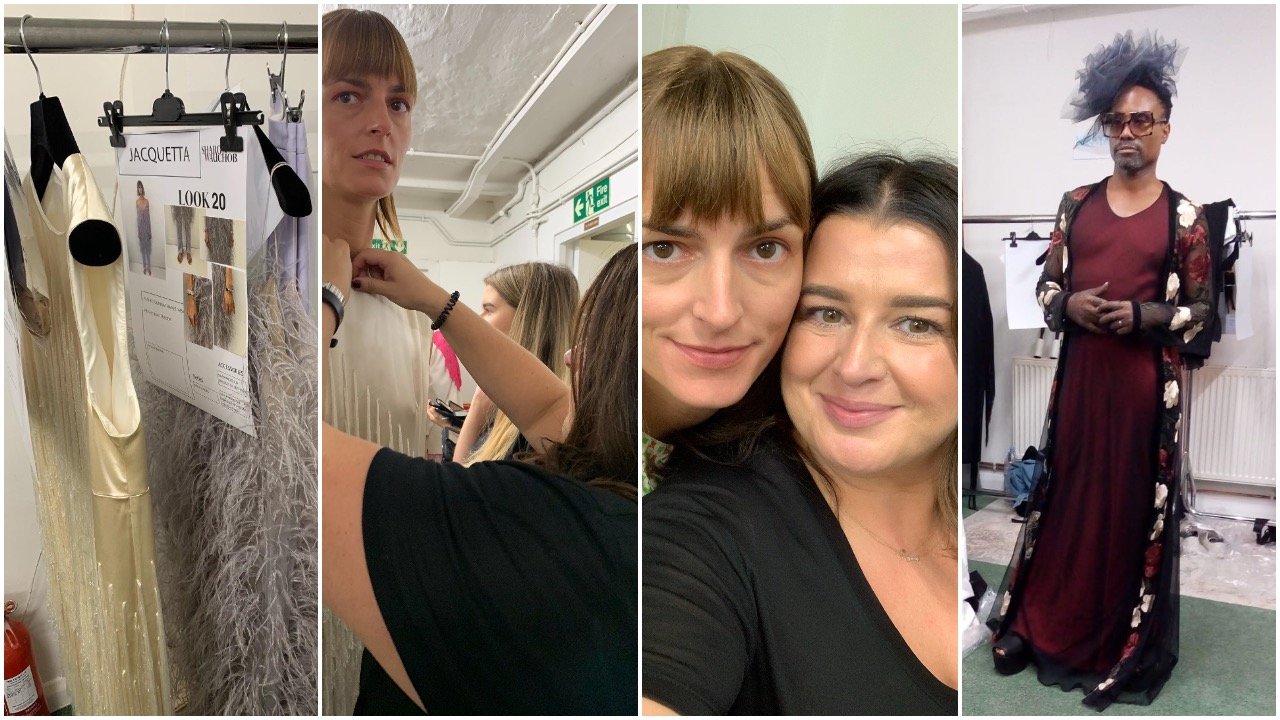 It only seems like a moment since I was there, amidst the hustle and bustle of our capital, yet the reality is several weeks have passed and now the temperatures have dropped, it seemed the right time to fast-forward to Spring 2020 fashion.

From square-toed sandals and boots to tiny handbags, puffer jackets and statement sleeves, through to cowboy boots and leather skirts, London Fashion Week is sure to deliver when it comes to inspiration for next season’s show-stopping wardrobe choices from the fashion set. Whether that’s inspiration from the catwalks or the street, there’s plenty to whet your fashion appetite – in fact, it’s a fashionista’s dream!

The show-goers, celebrities, influencers and trendsetters seemed to be shifting away from hyped-up new ‘on trend’ must-have pieces, favouring more long-lasting favourites. This is a major step towards sustainability, which was talked about a lot this year as Extinction Rebellion made their presence felt at many shows. This was also the case in New York for NYFW – luxe brand Bottega Veneta pieces were everywhere, and with such a high price tag they have to be forever pieces. Other key items of past seasons made a reappearance (Hello Shrimps bag!), and newer trends included styling tricks to keep your existing wardrobe feeling modern and up to the minute.

Everyone wore beige. Okay, not quite everyone, but a lot did, including Alexa Chung who stepped out in a beige co-ord and flat sandals. After that, there was a flurry of beige toned outfits seen all around the capital. The “new” neutrals trend that began to emerge in London last season, introduced by Burberry, continued into another season. Think beige, cream and camel mixed and matched in a palette of similar shades across entire outfits – as much a colour trend as a styling trend, as designers went tonal. 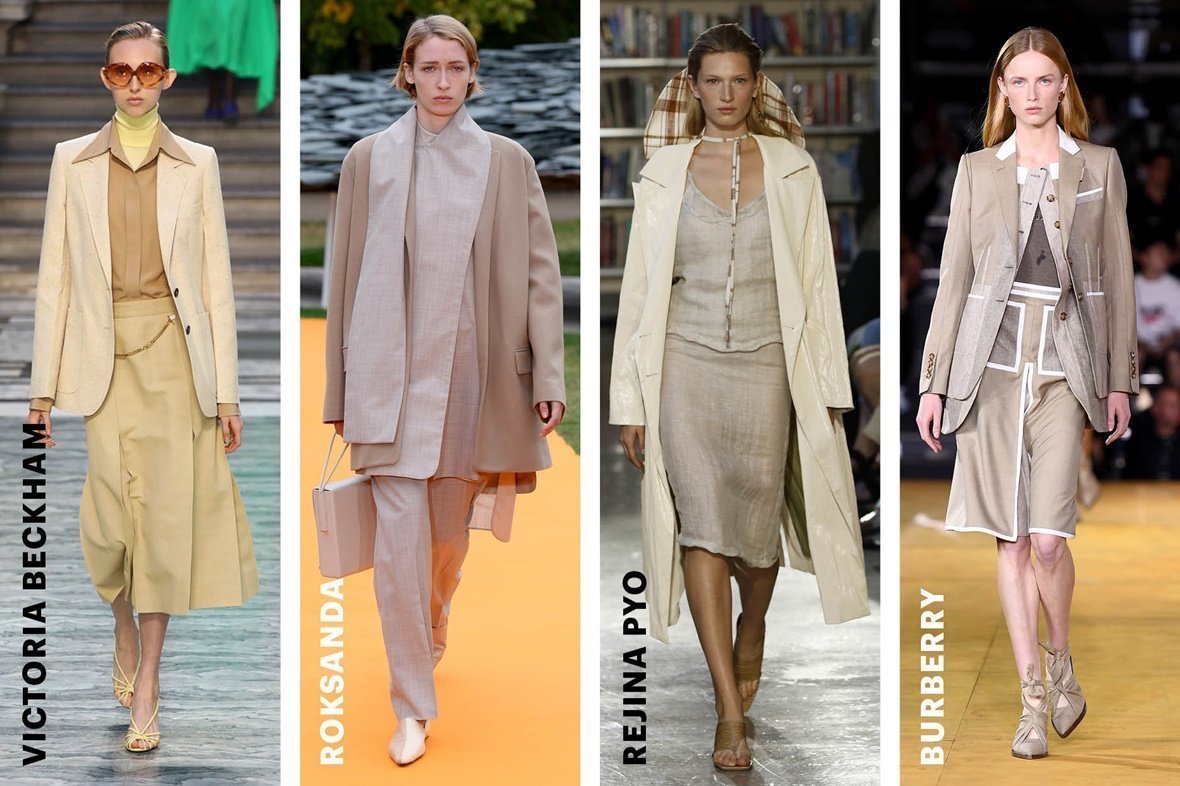 Whether it’s vegan, vintage or genuine, I saw brown leather all over London during Fashion Week. The neutral palette of conker brown lends itself to tonal dressing, which is still a huge trend for SS20. Brown leather will instantly inject a sense of luxury into your wardrobe this season and it only gets better with age. There are some great options available on the British high street from M&S, Whistles and Kitri Studios. 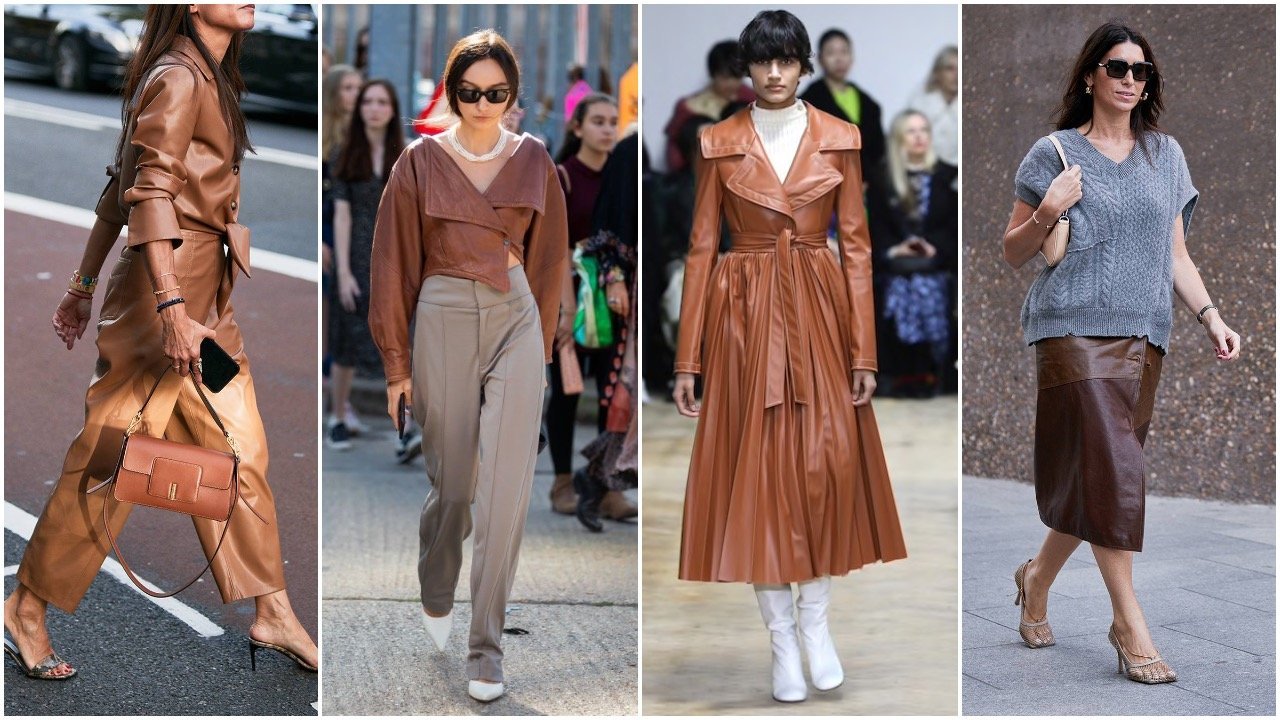 Since Holly Willoughby wore the now legendary Grenson Nanette Boots in the “I’m a Celebrity” jungle everyone has been going mad for the hiking boot trend. Your best friend, whatever the season, ankle boots never go out of style. Finding the perfect pair of ankle boots is an essential shopping goal as a good pair can be styled all year-round, no matter the weather. If you’ve not yet had the chance to read my blog post on the Best Boot Trends you can read it here. 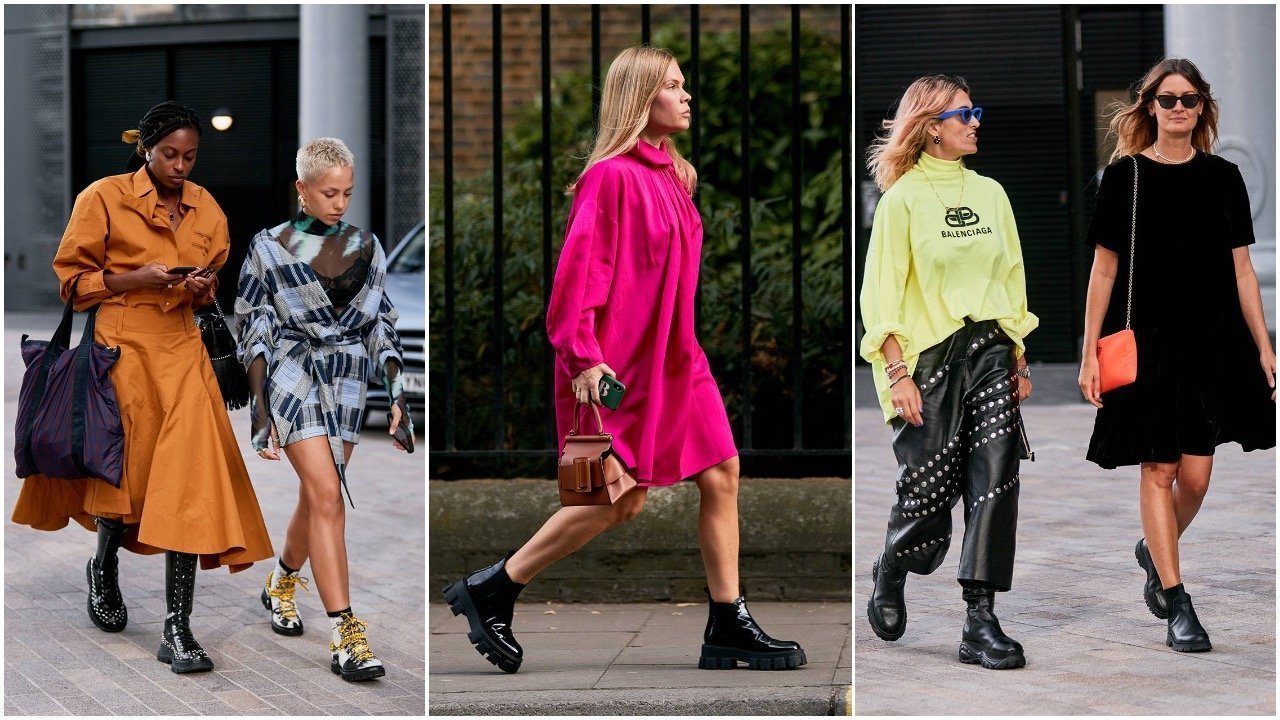 Transitional trenches remain a key spring style, which was also reflected at New York Fashion Week. In London, the city’s creative designers reworked trenches to offer something fresh. They were chopped up and deconstructed at JW Anderson and Burberry or featuring interesting additions, such as pleated silky panels/scarves at Huishan Zhang. 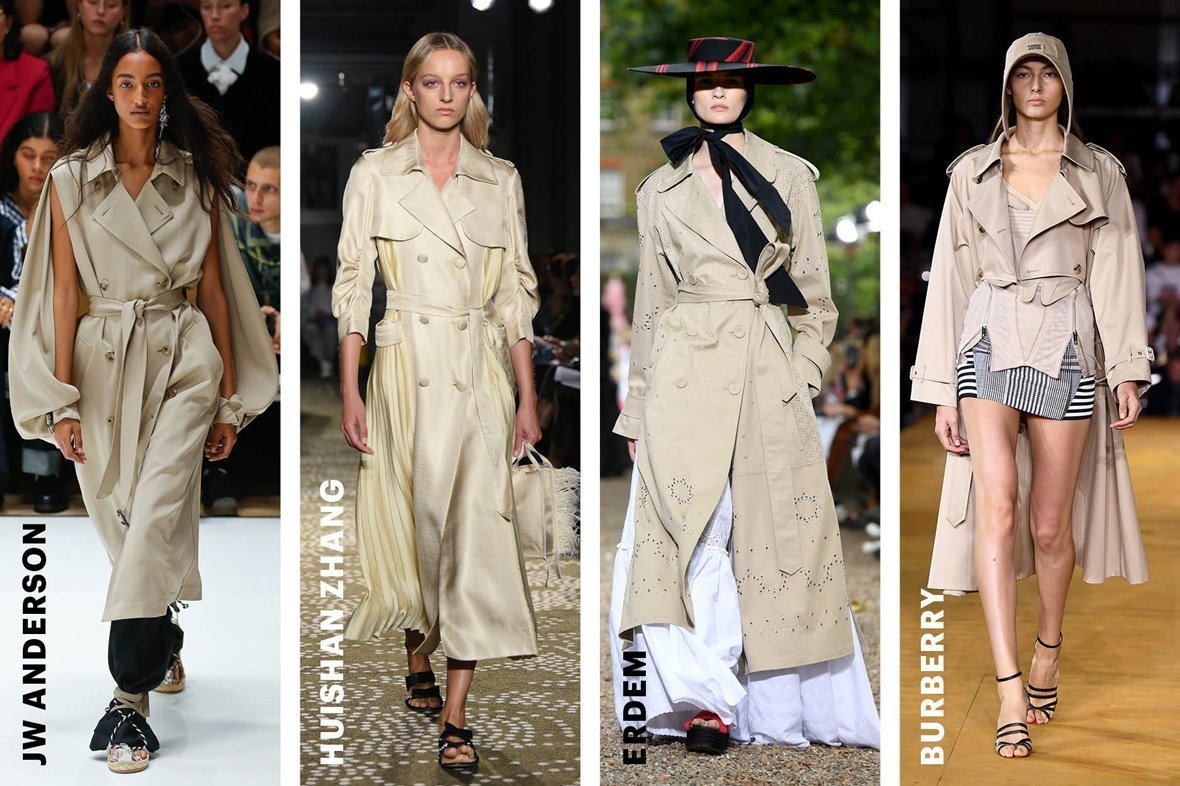 Bet on a blazer for Spring 20, as tailoring remains a mainstay of collections and a must-buy. This classic wardrobe item never dates and is always the perfect partner for jeans and a simple white tee. In London, designers elevated boxy blazers with details such as regal sashes at Erdem and embellishments at JW Anderson. 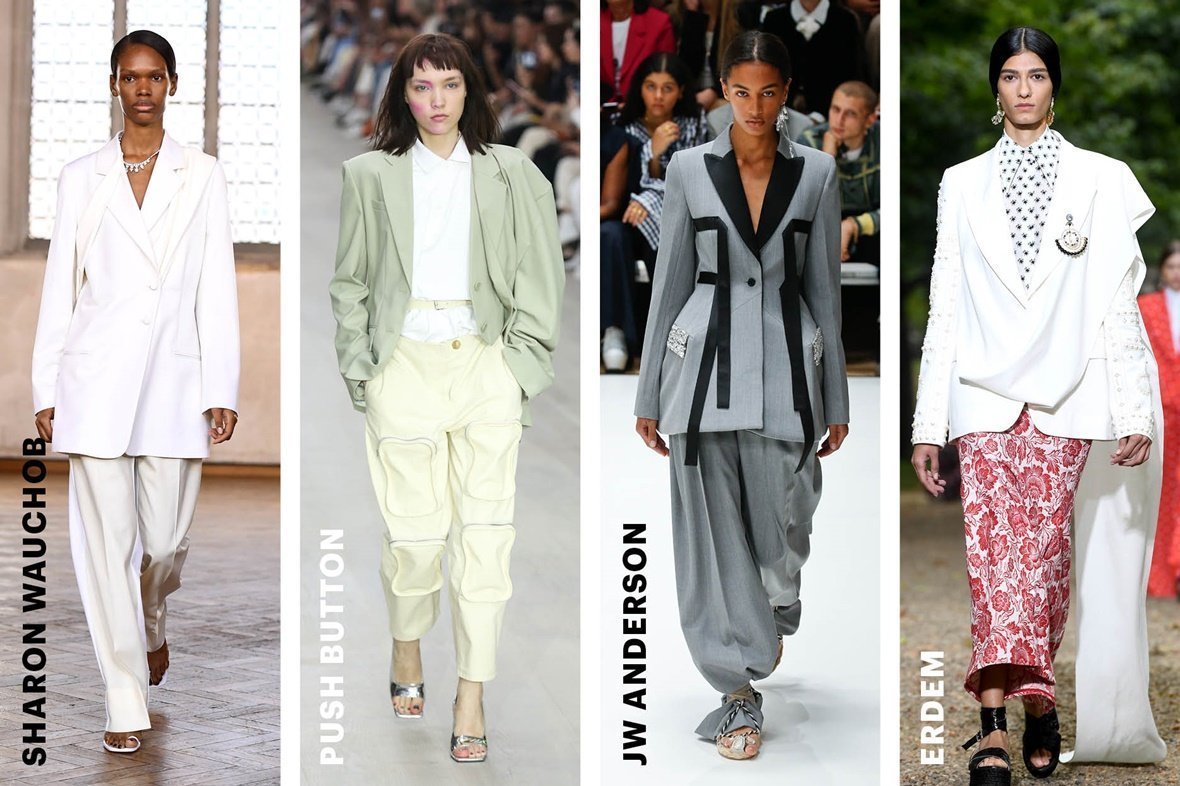 Continuing from the London Fashion Week shows of Autumn ‘19, feathers remained a prevalent theme for Spring 2020. This time around, designers used them to trim the hems of miniskirts and frocks and tops. This also dominated the in the SS20 runway show from Sharon Wauchob (Image 2 from the left was dressed by me). 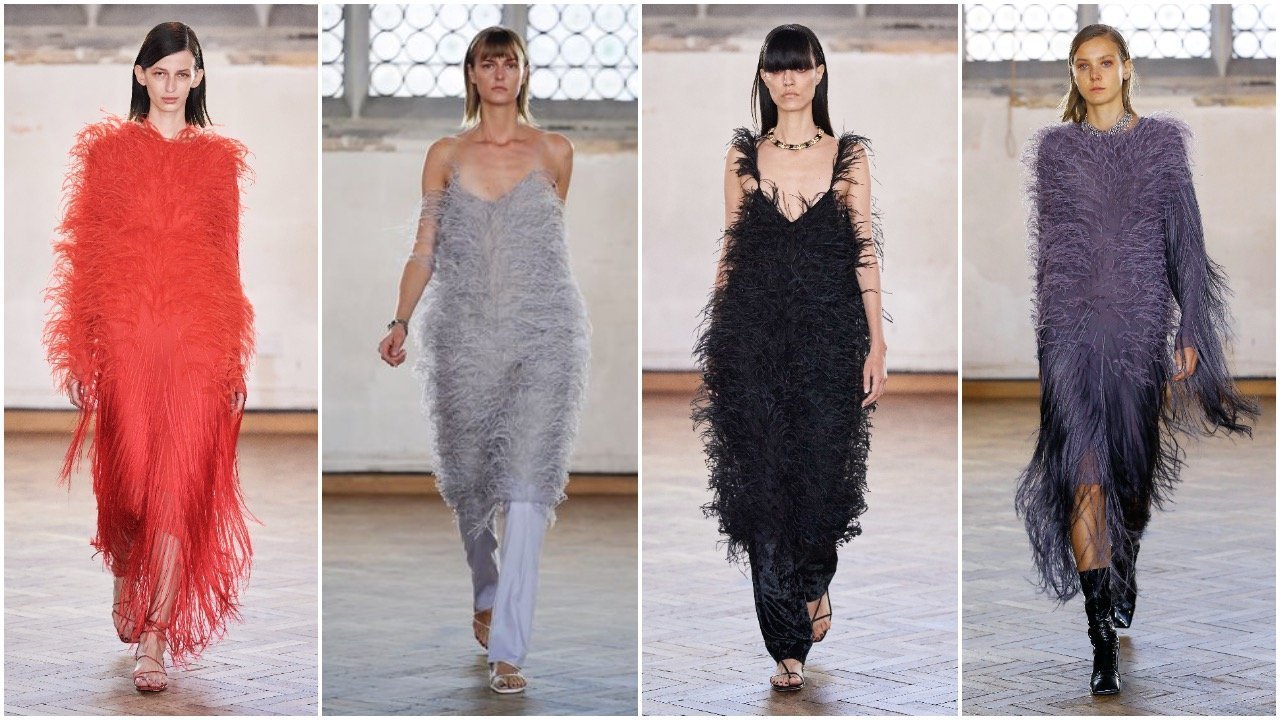 Statement sleeves have been trending for years now, and each season, there’s a new style to fall for. Like the sleeves on the puff dresses, the gathered-sleeved trend is a bit longer on the arm, offering a great option for the British weather. 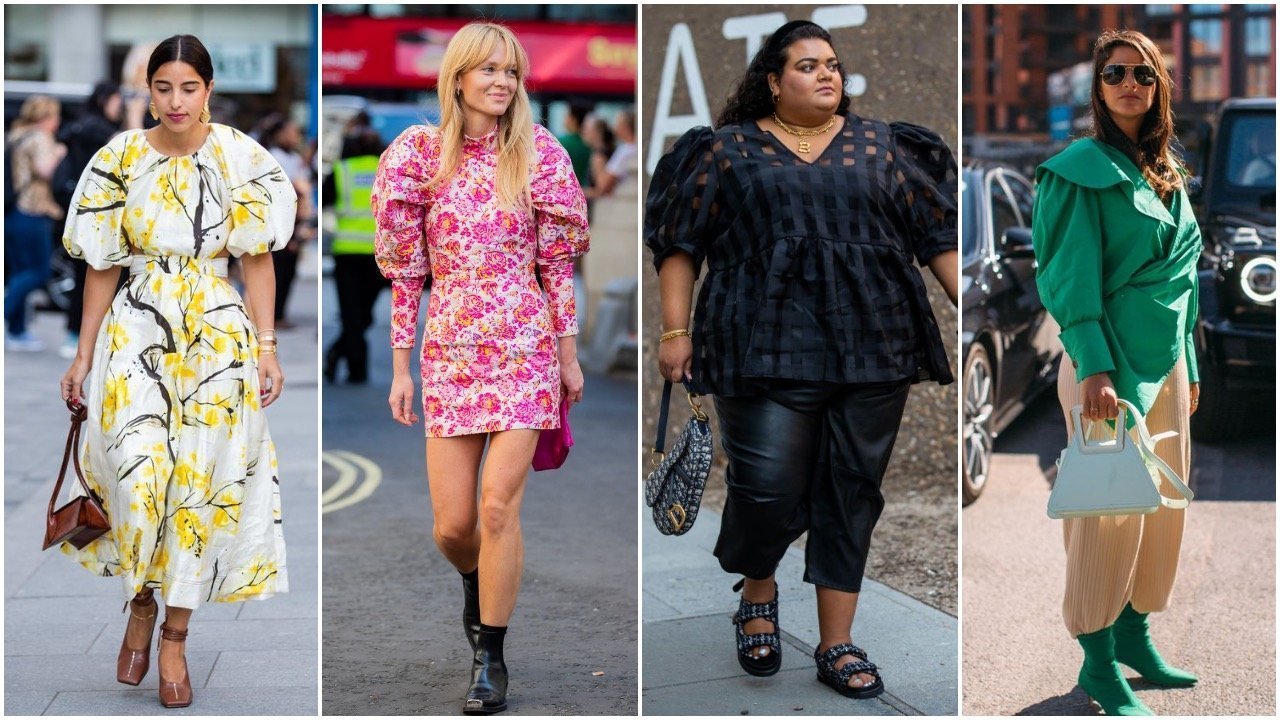 There were plenty more trends seen during my time at London Fashion Week, however, these were amongst some of my favourite as they are the most wearable (feathers in Sainsburys anybody!). As Spring 2020 begins to hit stores in mid December it’ll be clearer to see which trends have made it from the catwalk to the high street and I’ll update you once we have a clearer picture. In the meantime, here’s some pictures of the backstage action at London Fashion Week SS20. 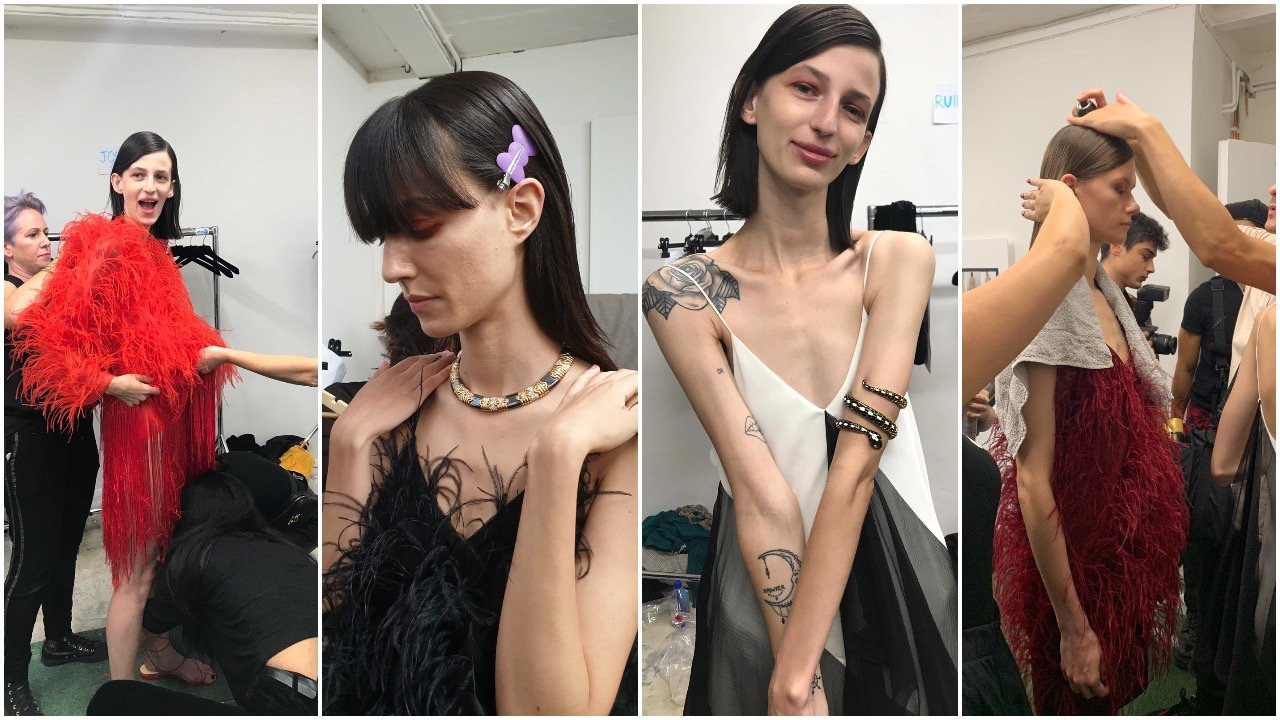 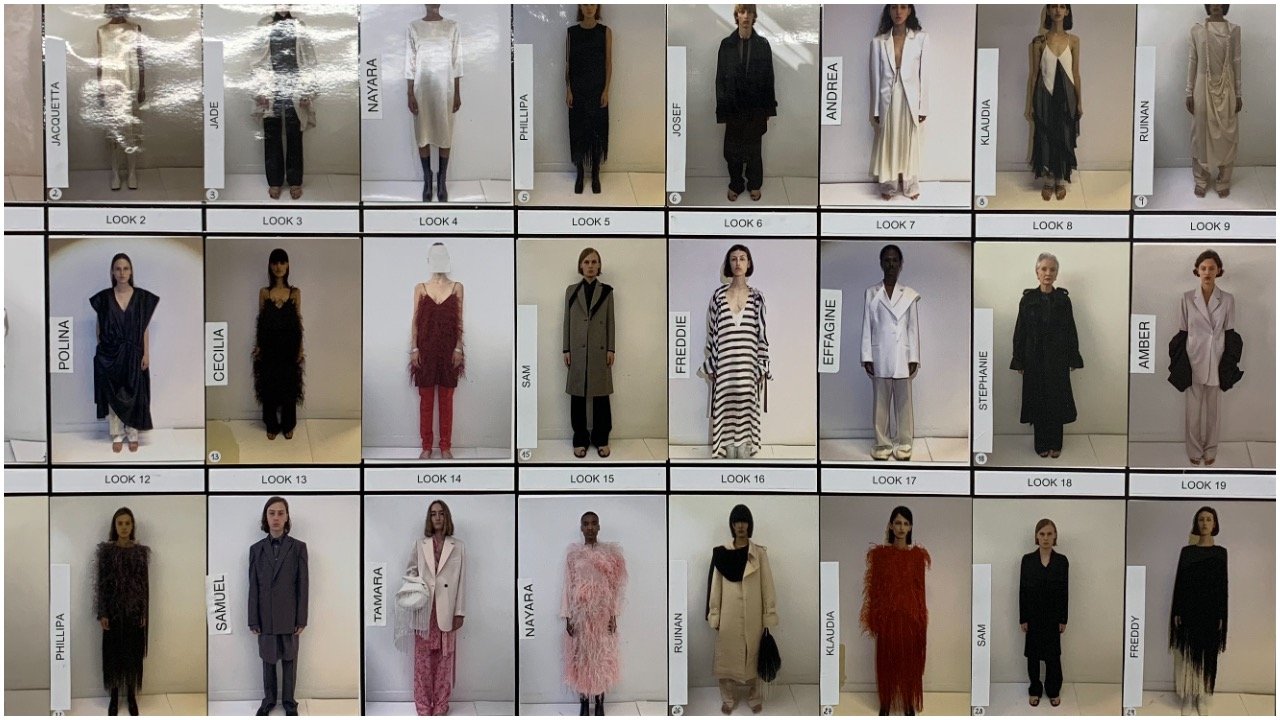 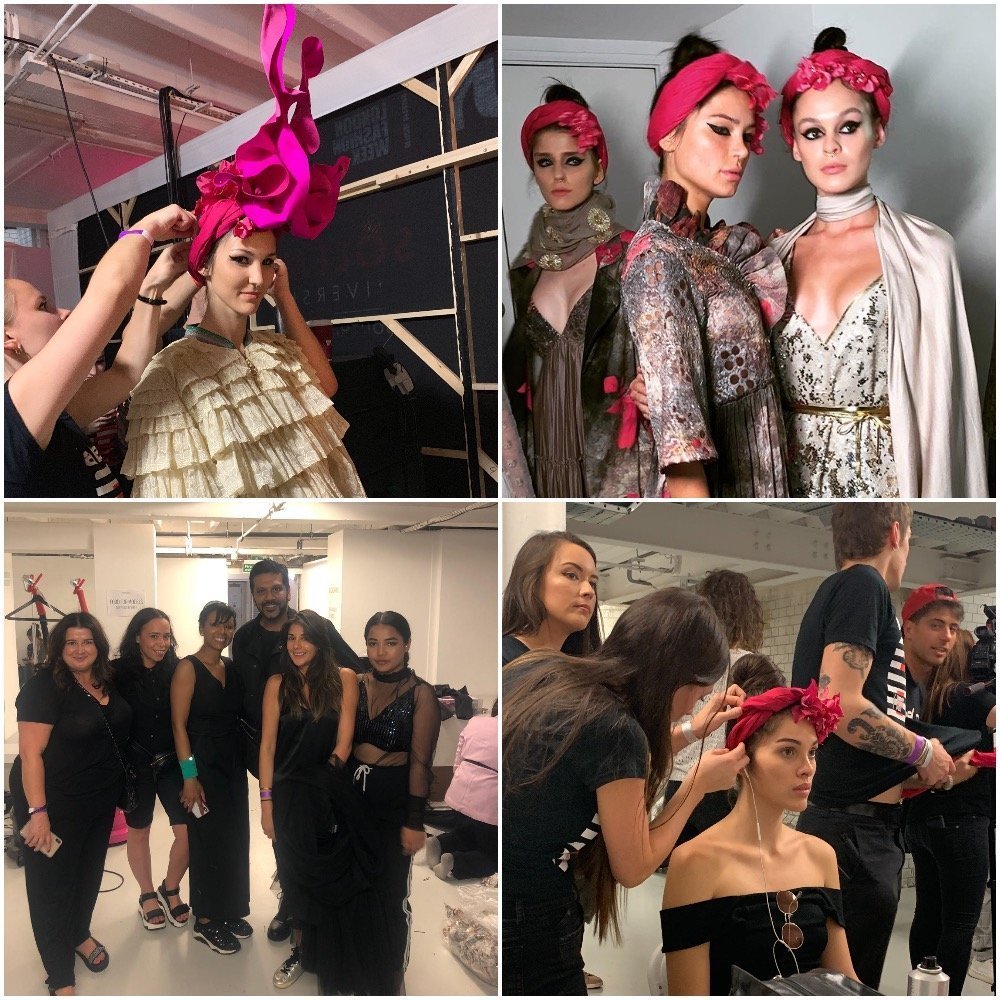 Other posts you may enjoy 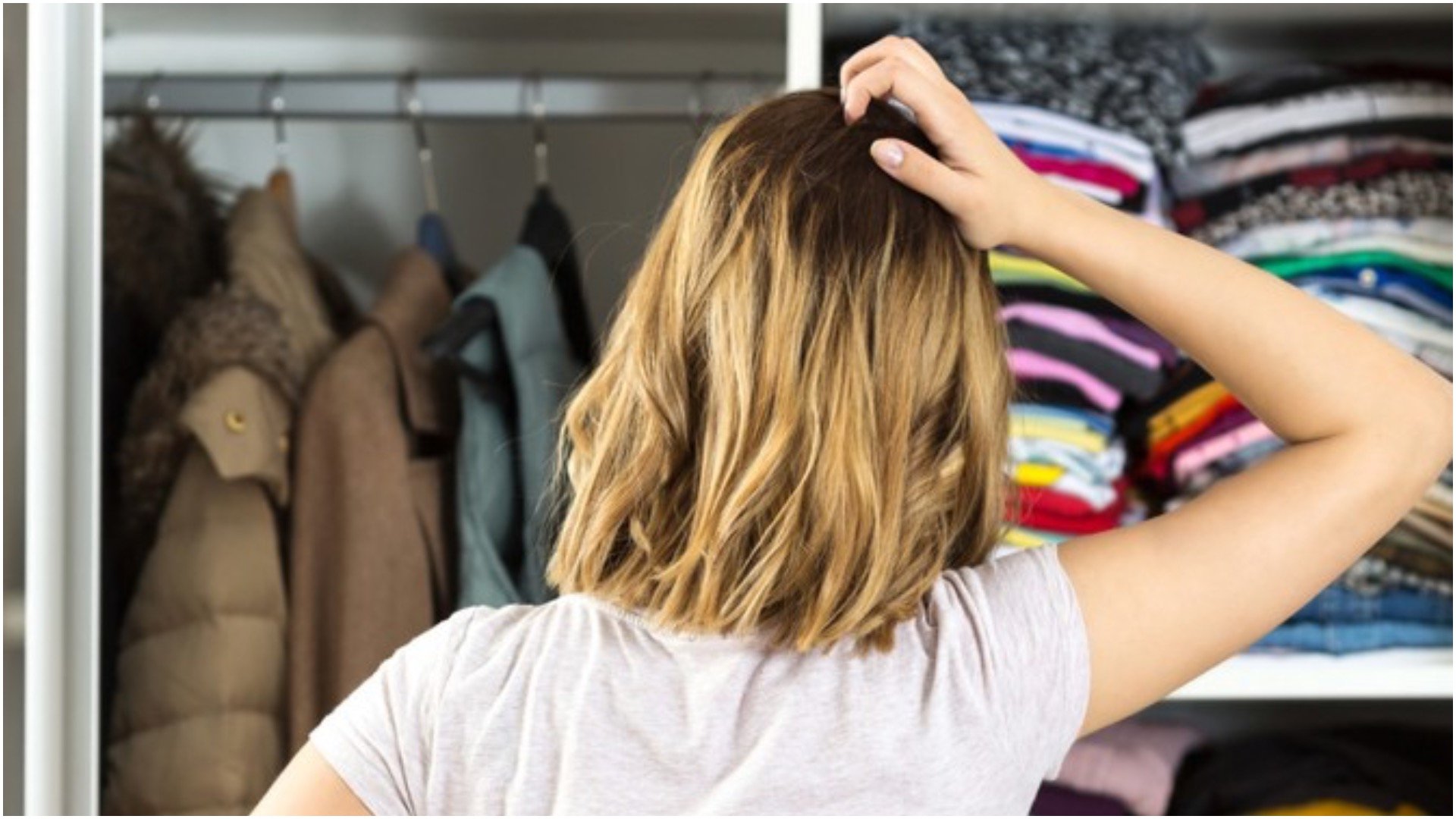 I’m feeling very festive all of a sudden. I’m

AD - I returned from Dubai to a surprise delivery

One from Friday’s date night at @victors_restaur

WHY HIRE A PERSONAL STYLIST? There are often que

Meet Love. For those of you that haven’t met bef

Get all the latest updates, style tips and news straight to your inbox.